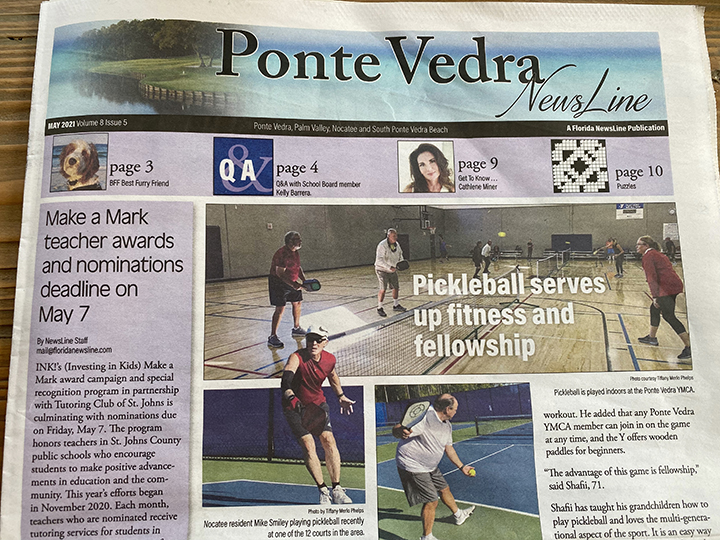 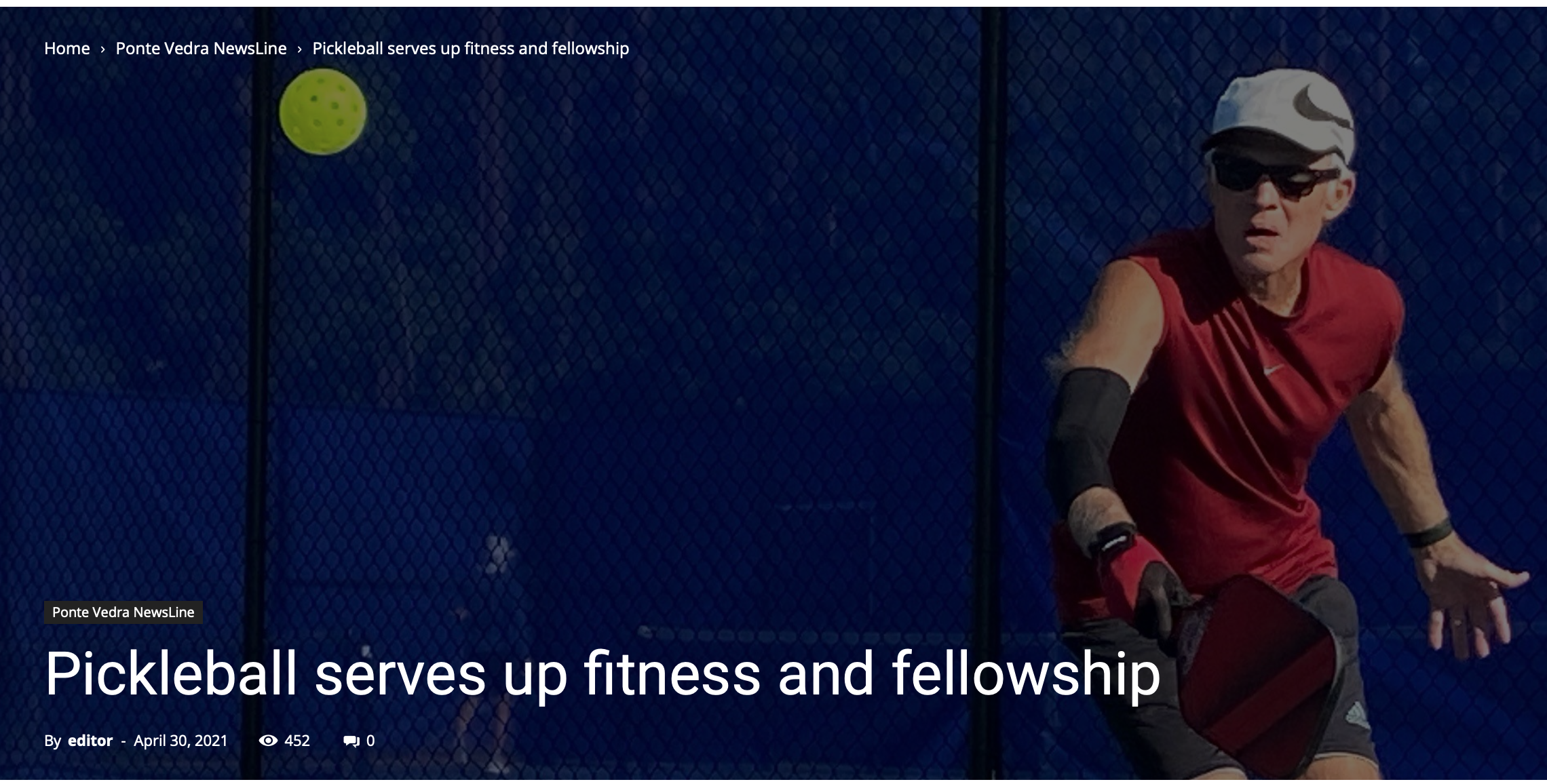 Thank you to Tiffany Phelps of the Ponte Vedra Newsline for shining a spotlight on the explosive growth of pickleball in Ponte Vedra, Florida and for including Vossberg Gainor in the feature. Check out the full feature on their WEBSITE.

A special thanks to fellow pickleballer, Terri Wilson, for introducing me to Tiffany. The social + friend network that comes with pickleball is priceless.

Laura Gainor had just launched a marketing company, Vossberg Gainor, while living in Chicago when pickleball hit her radar quite by accident in 2019.

“I was introduced to USA Pickleball through my husband because he used to have George Bauernfeind as a client at a previous agency. George is the chief marketing officer for USA Pickleball,” said Gainor, whose husband works in sports marketing.

USA Pickleball became Gainor’s client, and Gainor quickly realized that she wanted to learn to play the sport to be a more effective pickleball marketing consultant.

“On my one-year anniversary of launching Vossberg Gainor, I rebranded my website to have the unique niche of Pickleball Marketing. USA Pickleball continues to be a client, among others,” she said.

In October 2020, Gainor and her family moved to Nocatee, specifically because of its 12 new pickleball courts (for Nocatee residents only). She normally plays twice a day, every day.

“It’s the fastest growing sport in the USA, and it is a thriving social sport with a huge friend network,” said Gainor, 38. “It actually became more popular during the pandemic because people could play outside and socialize safely.”

Gainor’s enthusiasm for the sport can be found throughout Ponte Vedra Beach — both indoors and outdoors.

Reza Shafii plays pickleball three days a week at the Ponte Vedra YMCA every morning. He has been doing so since 2018 when he moved from Maryland where he also loved playing pickleball. There, he saw the numbers go from 20 people playing to 300 before he and his wife moved to Florida to be near his daughter and grandchildren.

“If you start this game, you won’t know when to quit,” said Shafii. “The fundamentals are the key. My goal is to encourage people to play better.”

Shafii said the camaraderie in pickleball is very different than in other sports, and it also provides an excellent cardiovascular workout. He added that any Ponte Vedra YMCA member can join in on the game at any time, and the Y offers wooden paddles for beginners.

“The advantage of this game is fellowship,” said Shafii, 71.

Shafii has taught his grandchildren how to play pickleball and loves the multi-generational aspect of the sport. It is an easy way to teach respect and compassion for each other, he said.

USA Pickleball Ambassador Mike Guyot, a Nocatee resident, was introduced to pickleball 14 years ago while living in The Villages near Ocala. Before long, he became an instructor with a 4.0 rating (skill level ratings fall between 0 – 5.0 in half point increments). Next Guyot captained teams and became a member of the Pickleball Community Volunteer Group. Once he moved to Nocatee, Guyot continued to play and was looking for ways to reach more pickleball players. That’s when he became an USA Pickleball Ambassador.

“The primary goal of an ambassador is to help the sport grow, welcome people and train players,” said Guyot, 72.

According to USA Pickleball reports, there are 4.2 million players in the United States, and the average age for all players is 41 years old. Also, 2020 marked the 55th anniversary of pickleball being invented by three fathers looking to keep their bored children active in the summer. Two stories exist about the origin of the game’s name, according to USA Pickleball. The prevailing one is that one of the fathers got a dog a year or so after the game was invented and named it Pickles. The dog often ran off with the ball, and so, when an official game name was needed, well, “pickleball” stuck.

The growing popularity of pickleball did not go unnoticed by Austin Taylor and Mike Miles, The Yards’ finance and operations director and general manager, respectively. They took over the Oak Bridge Club after it failed as a golf course and country club, said Miles. Construction of 12 pickleball courts, slated to open in October, is currently underway at this Ponte Vedra Beach sports and social venue, located at the Oak Bridge Club in Sawgrass. It also includes a renovated 12-hole golf course.

“After a great deal of research, we landed on pickleball, and our whole business model is for profit,” said Miles. “This is pay to play, and we may or may not have memberships. There will be no fighting for court space as you will get your own court, and you will be treated as a member during that time.”

Miles said “Pickle Garden at The Yards” will include LED lighting, covered social areas, a cabana available to rent and a pro shop with equipment rentals. Taylor added that this is a venue where clinics, tournaments and programs will be held while still meeting the needs of all types of players by offering a reasonable hourly rate — all open to the public.

Photo by Tiffany Merlo Phelps
Nocatee resident Mike Smiley playing pickleball recently at one of the 12 courts in the area. 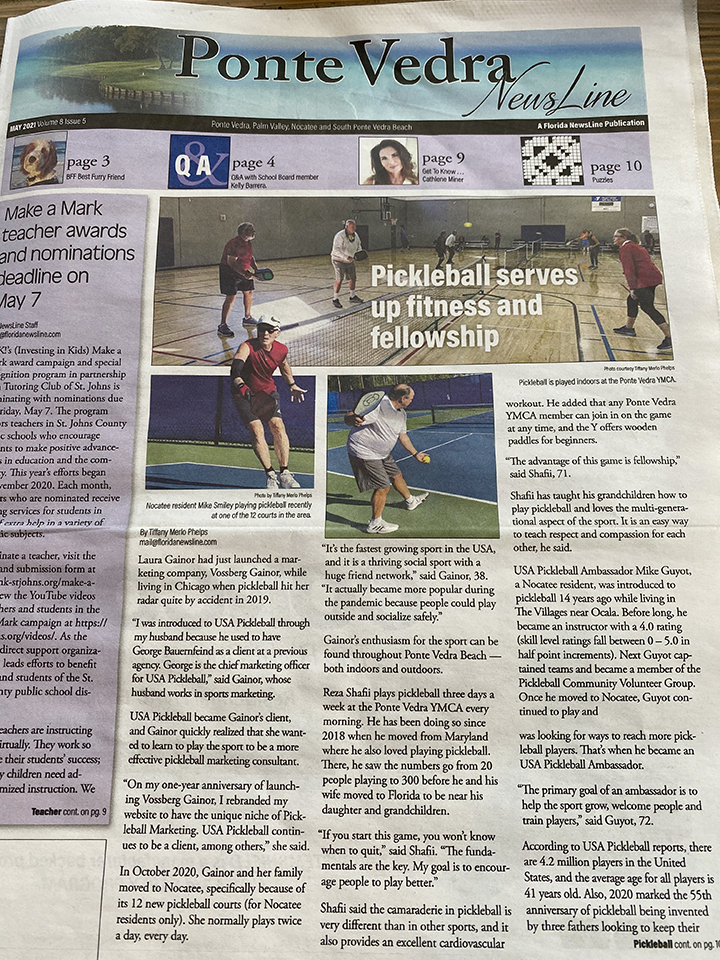 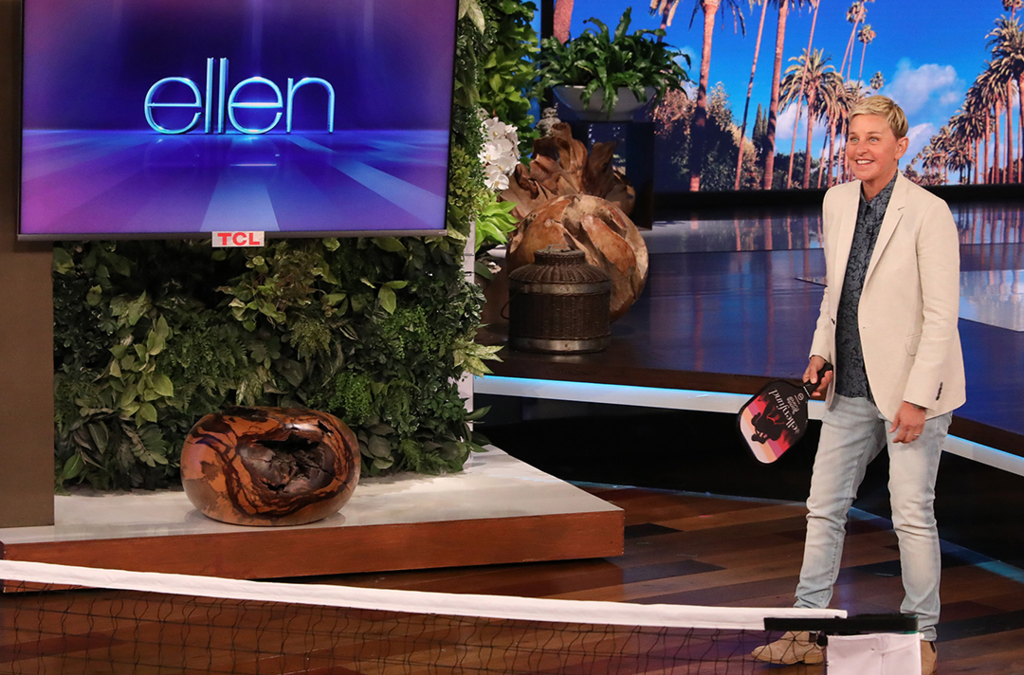 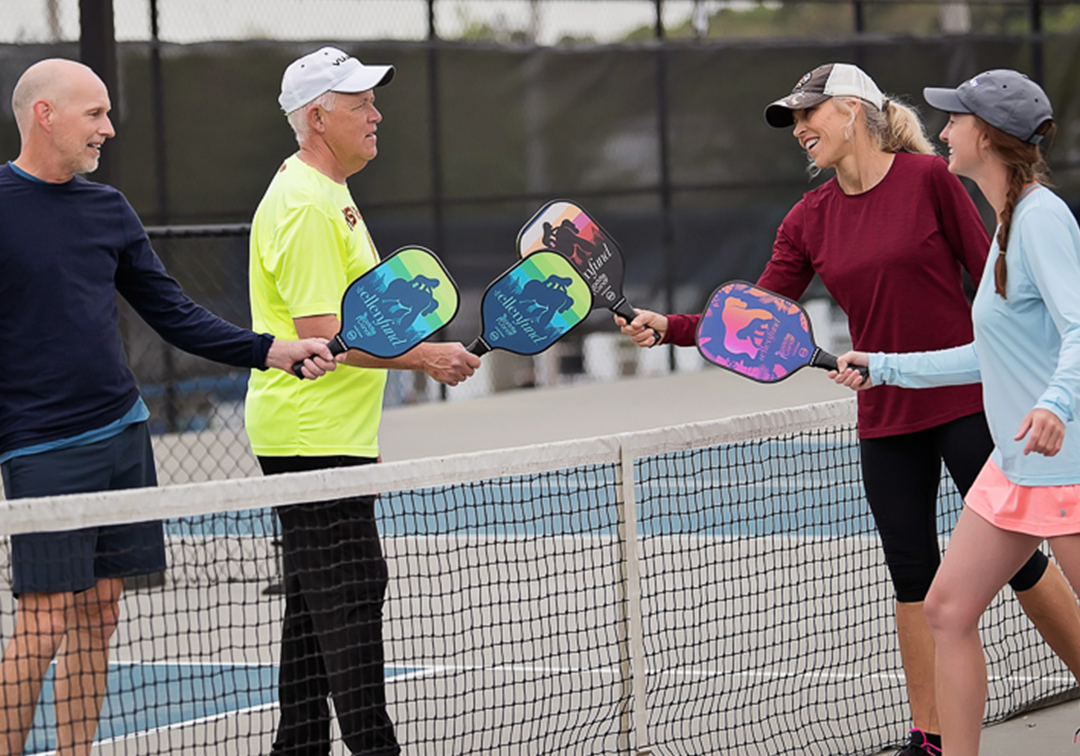 It’s no secret that Ellen DeGeneres is a huge pickleball fan. Now she is adding pickleball merchandise to The Ellen Shop with the launch of her custom paddle line with Vulcan Pickleball! All proceeds from the paddles sales goes to support her charity, The Ellen Fund.

Check out the full line of paddles in The Ellen Shop. 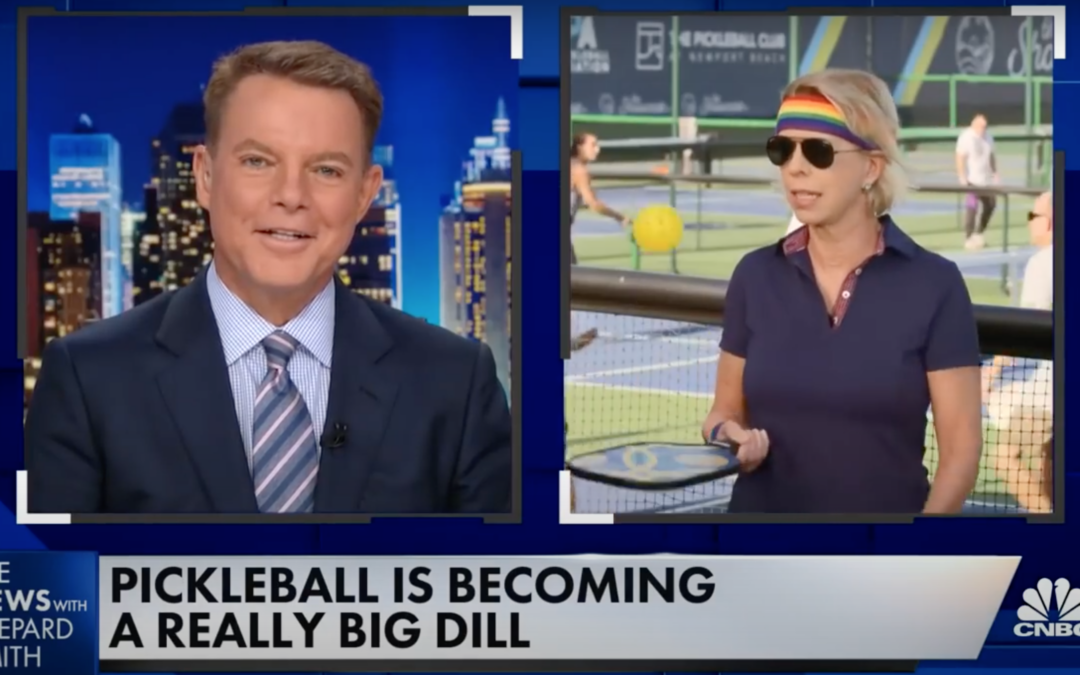 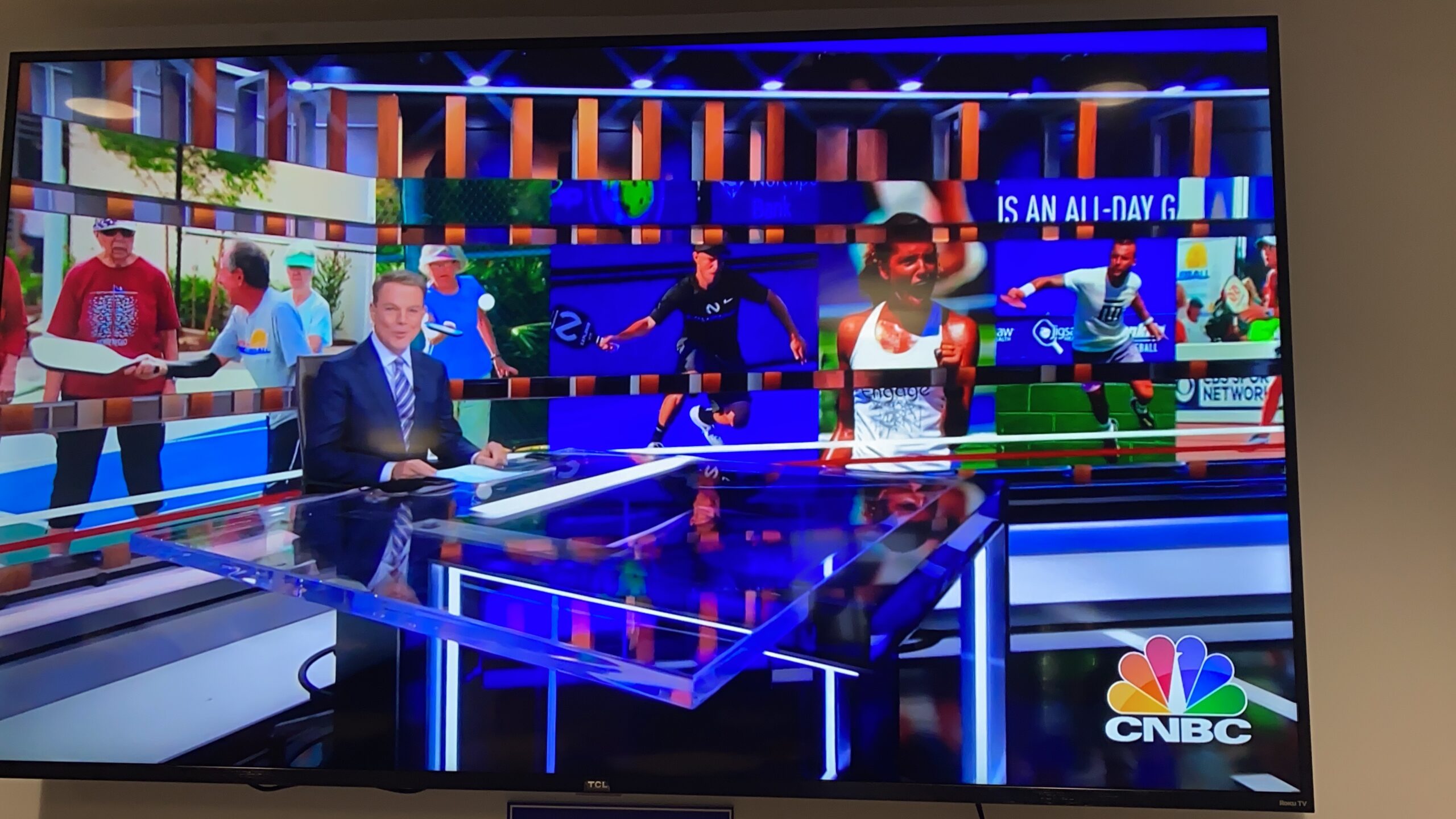 Pickleball continues to surge and CNBC’s Shepard Smith has taken an interest in knowing why!

On Friday, April 16th, ‘The News with Shepard Smith‘ had special correspondent Jane Wells sit down with Ben Johns to talk about the sport’s growth and his personal professional career as a player.

It’s an exciting time for pickleball and with 4.2 million players and growing, we will continue to see more opportunities for players and brands to monetize on the sport.

Check out the full CNBC segement below! Nothing better than having the opportunity to have watched it live while playing picklebally myself at the Pictona courts in Holly Hill, Florida. 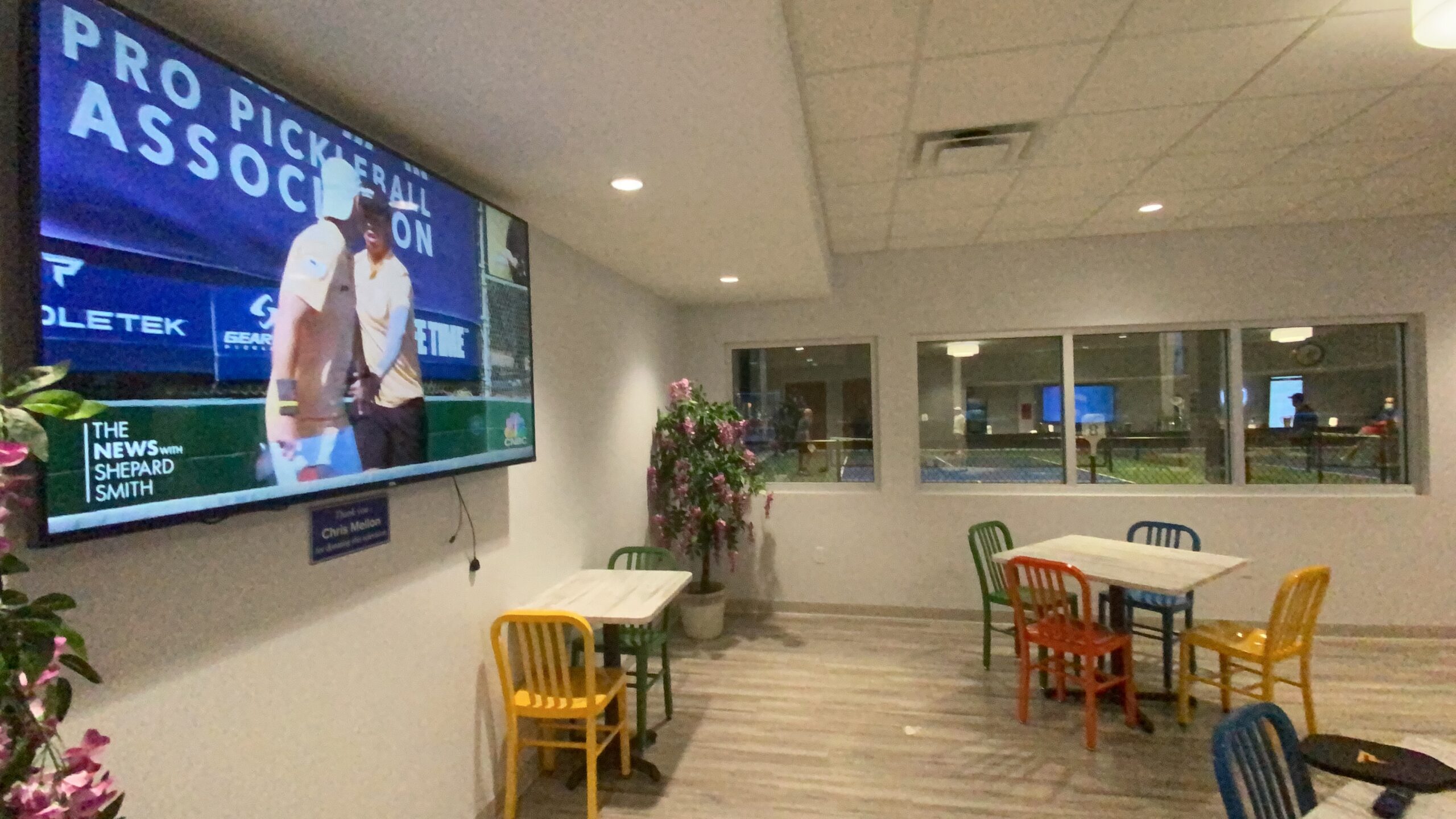 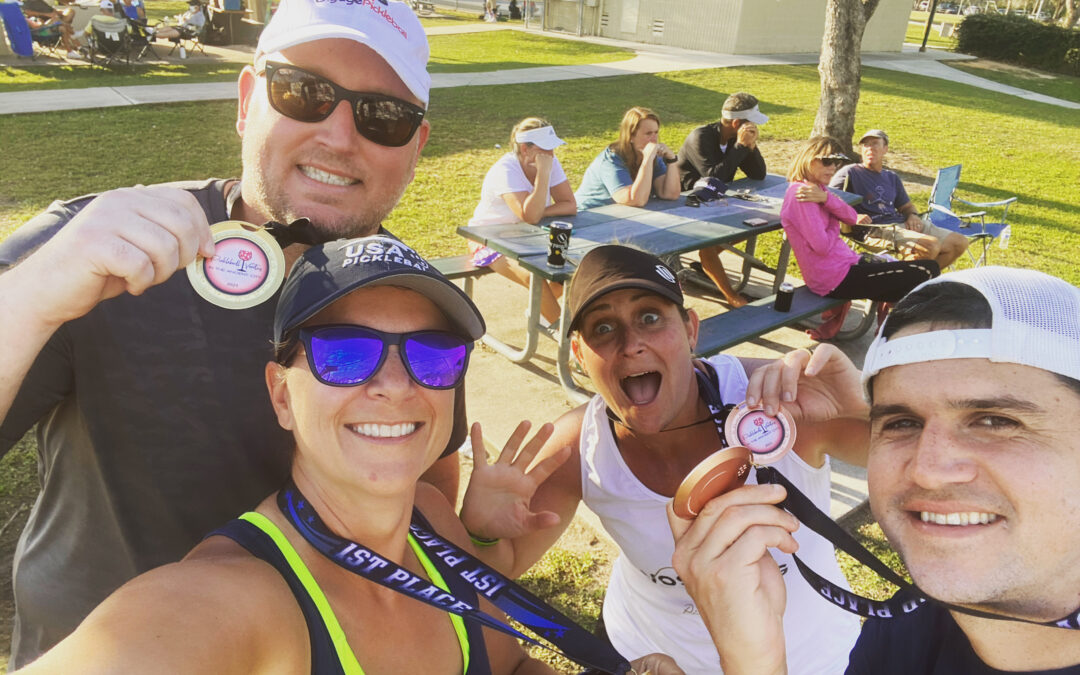 Laura Vossberg Gainor and Mia Azotea competed in the women’s doubles 3.0 and it came down to two excited matches between good friends, Deb Witzel and Betty Tully from Nocatee, for the gold medal! Gainor and Azotea brought home the silver and Witzel and Tully with the gold, with plans for more friendly matches to come at home!

Gainor also played with her brother-in-law, Jason Gross, and took home the gold in the mixed doubles 3.0 with Azotea and Brian Gainor winning bronze.

Gross and Brian Gainor fought hard in the extreme heat on Sunday for mixed doubles on February 28th and won another Gold medal for Team Vossberg.

Such a blast all competing together and officially challenged to continue signing up for more future tournaments with goals of getting close to 4.0 in the years to come! 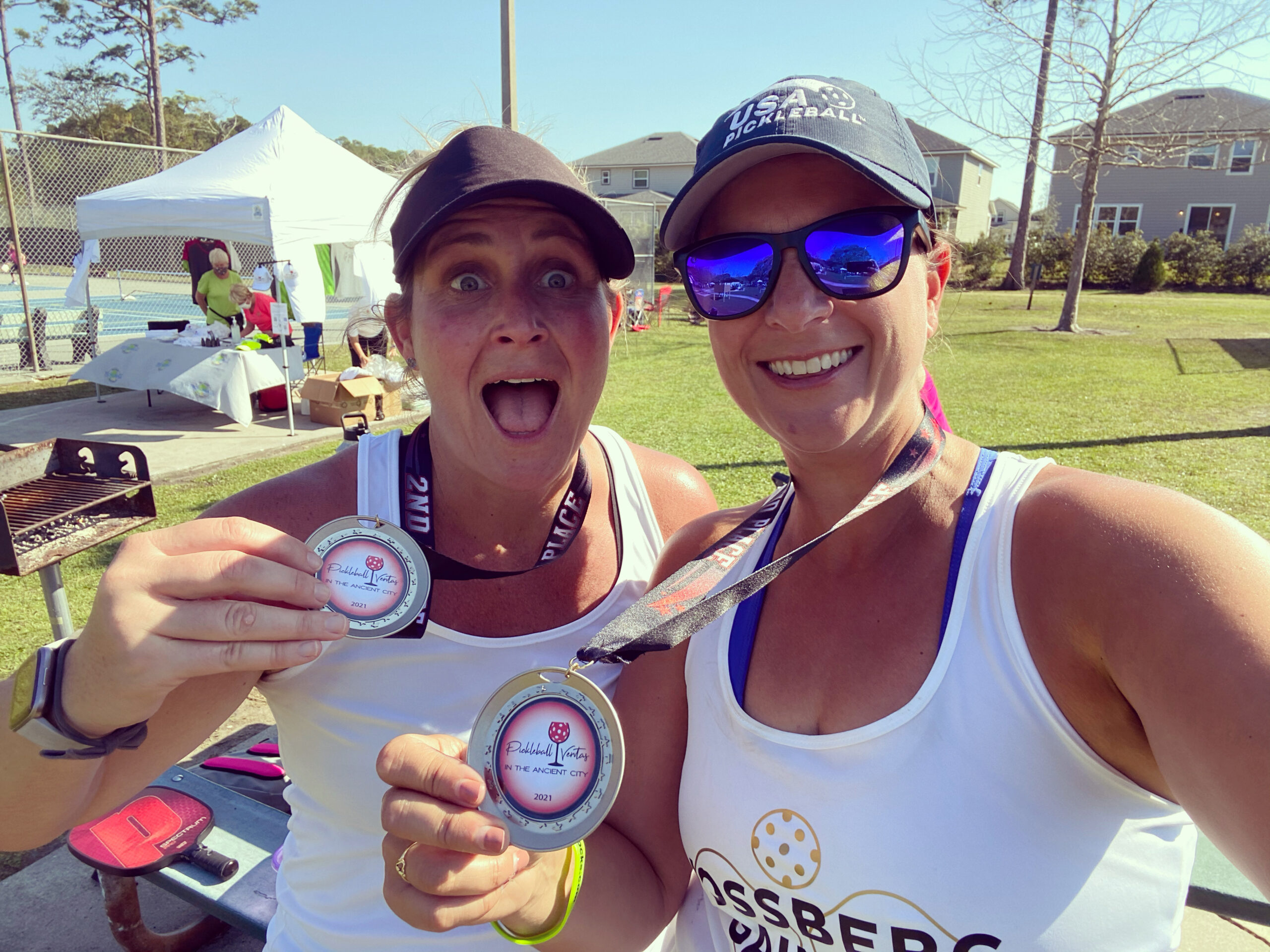 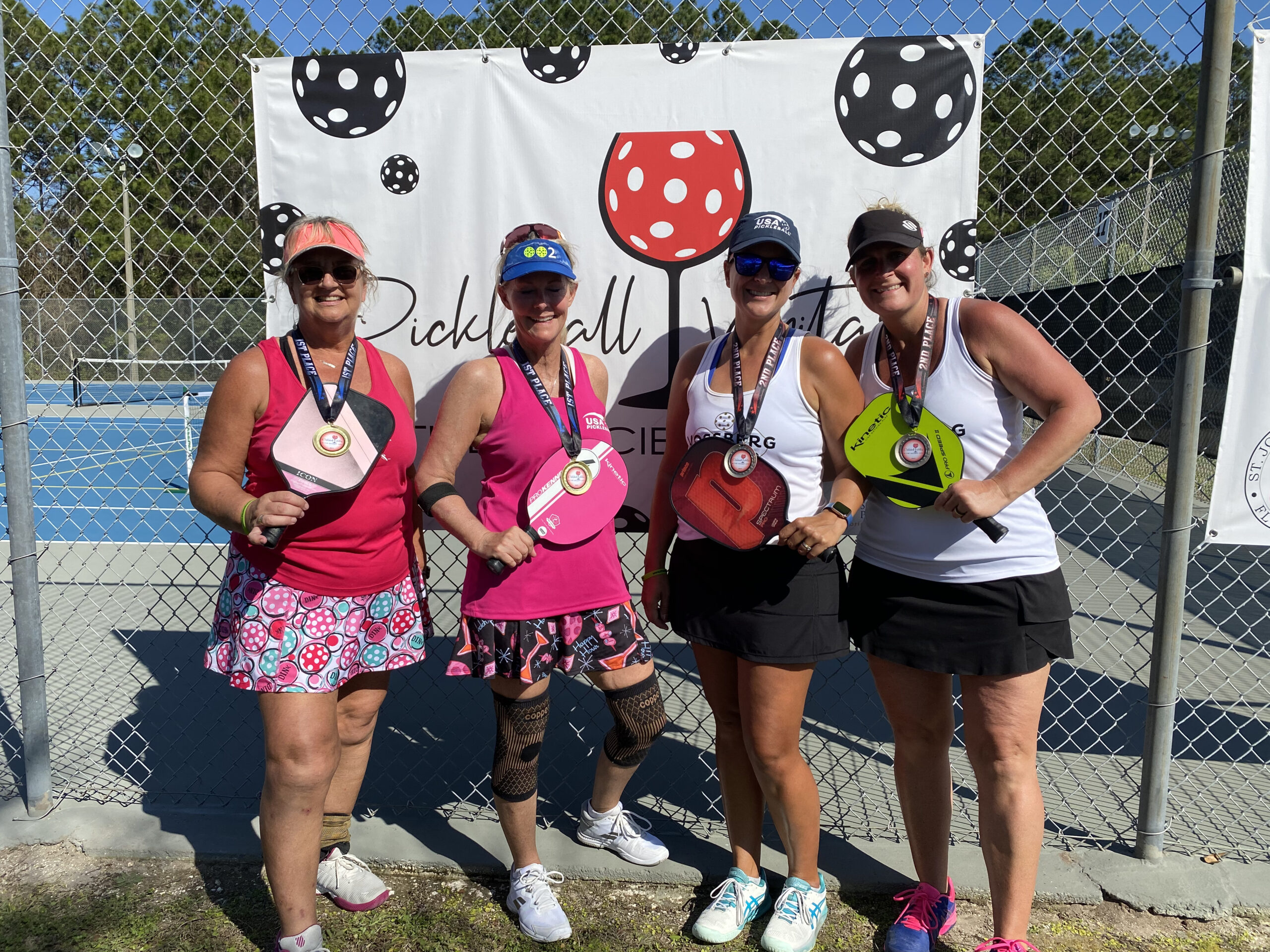 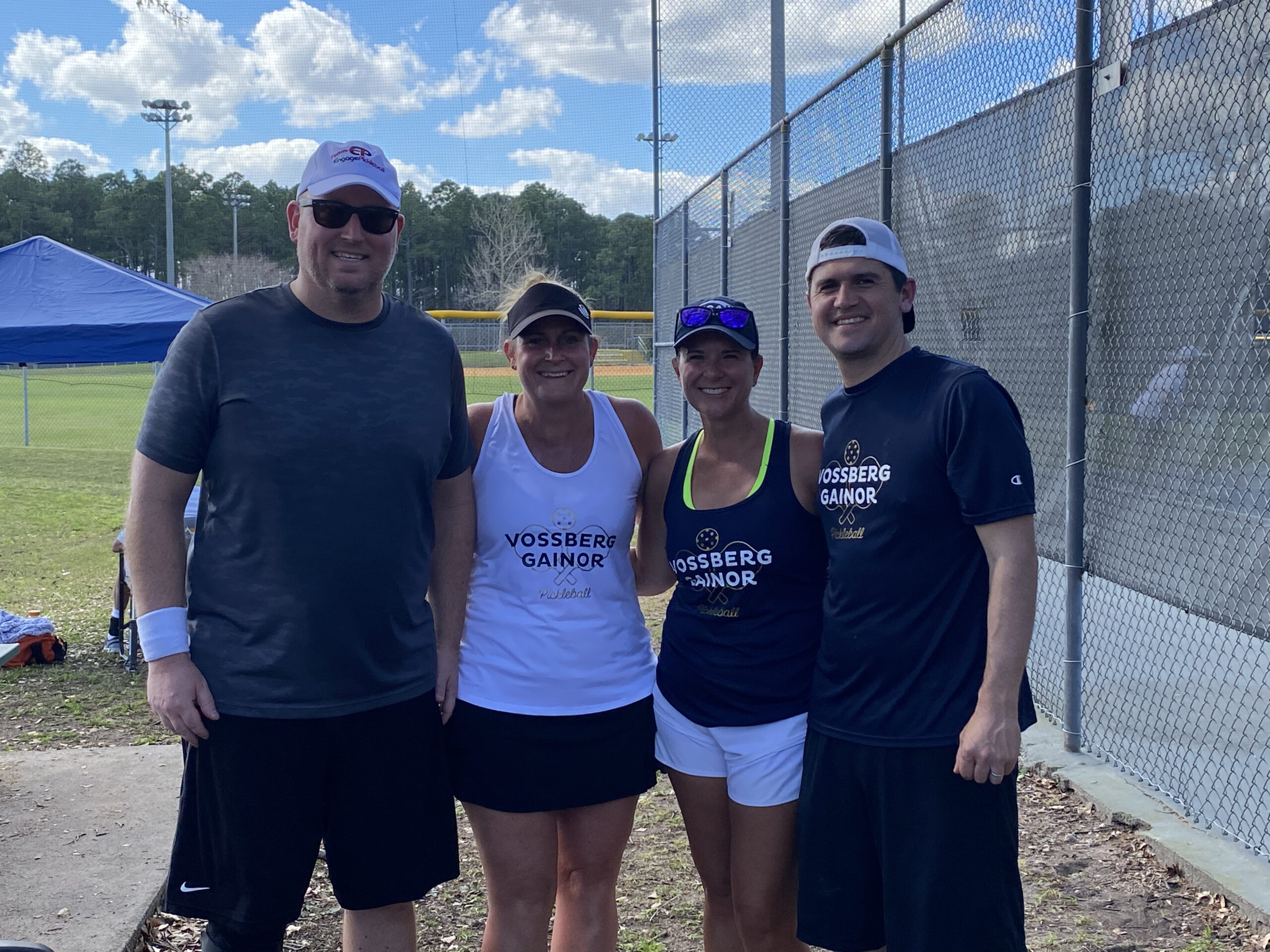 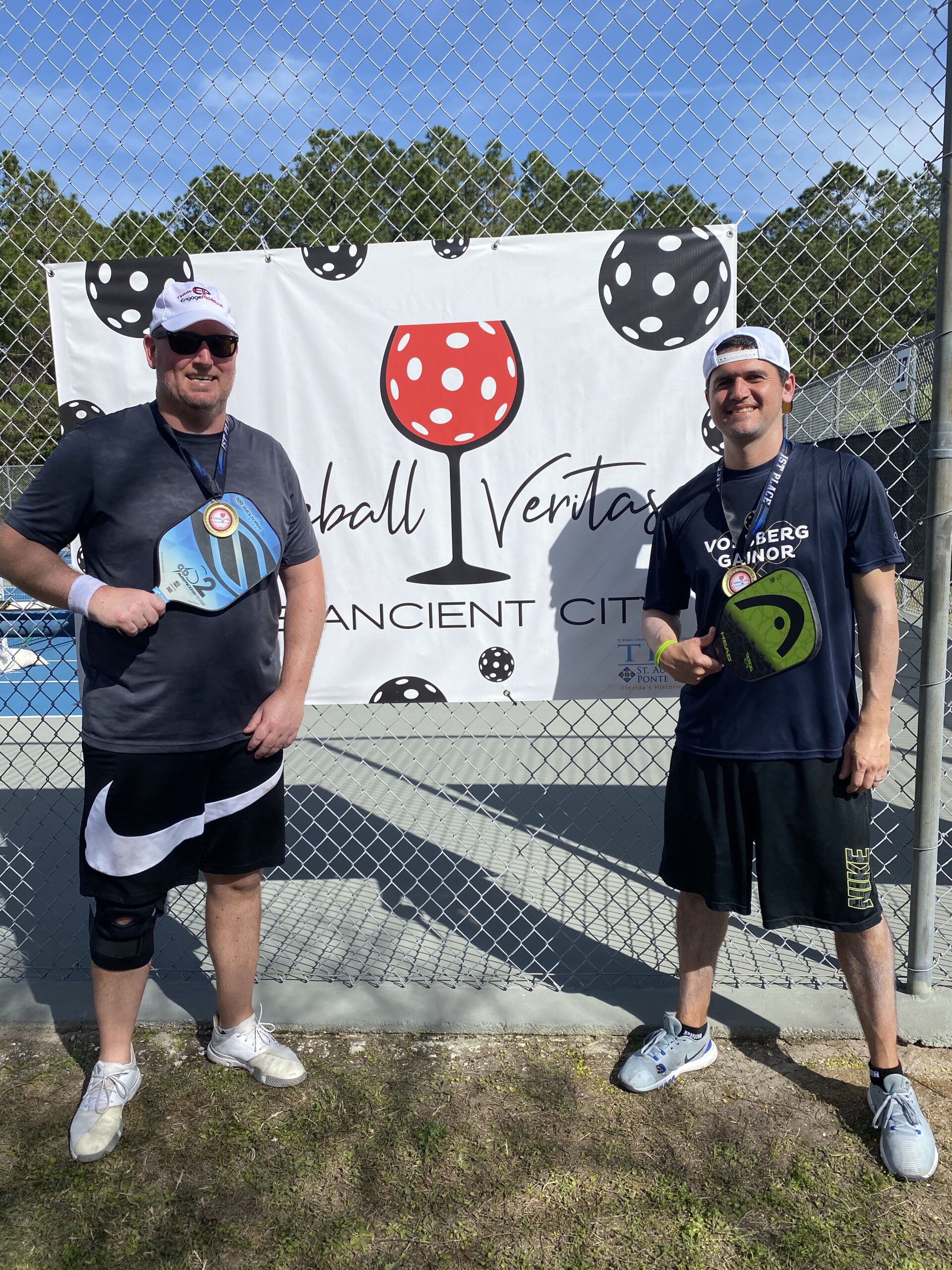 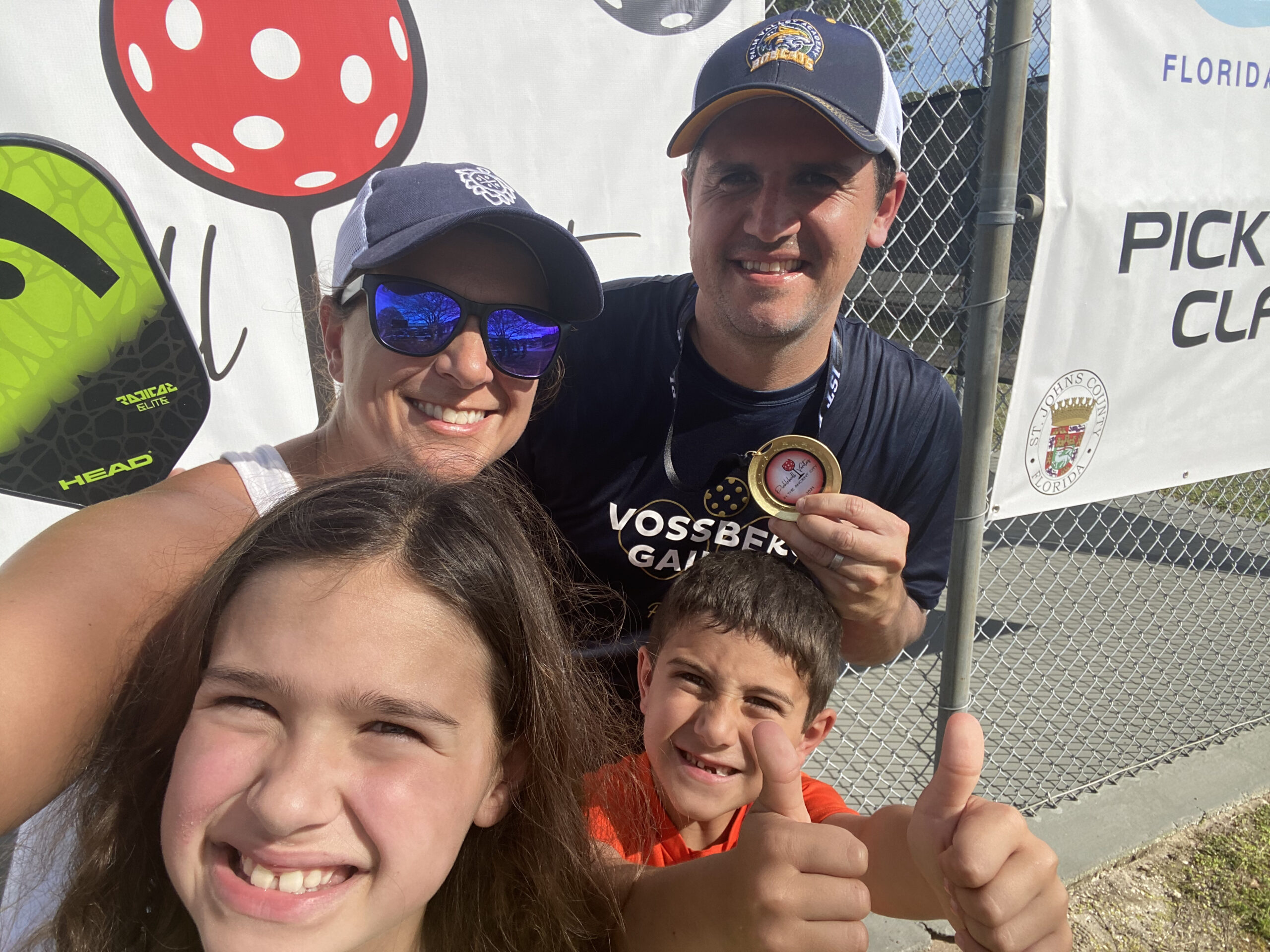 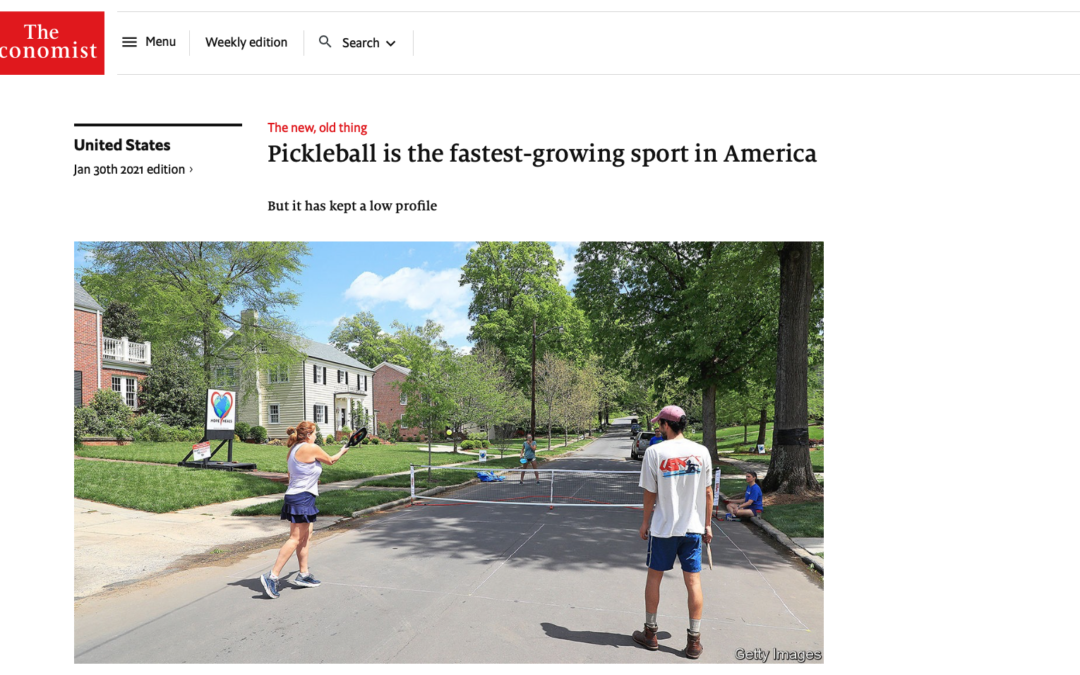 The Economist: Pickleball is the Fastest-Growing Sport in America

We recently spoke with The Economist with USA Pickleball CEO, Stu Upson, to talk about the growth of pickleball as one of the fastest growing sports in America. More and more players are hearing chatter about the sport and want in on the action! With almost 3.5 million players across the nation, we’ll see continuous growth over the next year.

Some key quotes from the article below and visit The Economist’s website to read the full article.

“In the five years to the end of 2019, pickleball participation grew by more than 7%, while Americans’ overall activity level stayed flat, according to the Sport & Fitness Industry Association. Although data from 2020 have not yet been released, the sport has picked up more swing thanks to covid-19. Last March, when quarantines went into effect and gyms closed, portable pickleball nets temporarily sold out. Players set up courts, which are half the size of tennis courts, in driveways. “It’s the new thing,” says Derek Heil, an employee at Dick’s Sporting Goods in Dallas, who has seen a sales spike for pickleball equipment over the last year, including for higher-end paddles which sell for around $100.”

As more people take up the sport, demand for televised matches and sponsorships will increase. – Stu Upson, USA Pickleball CEO 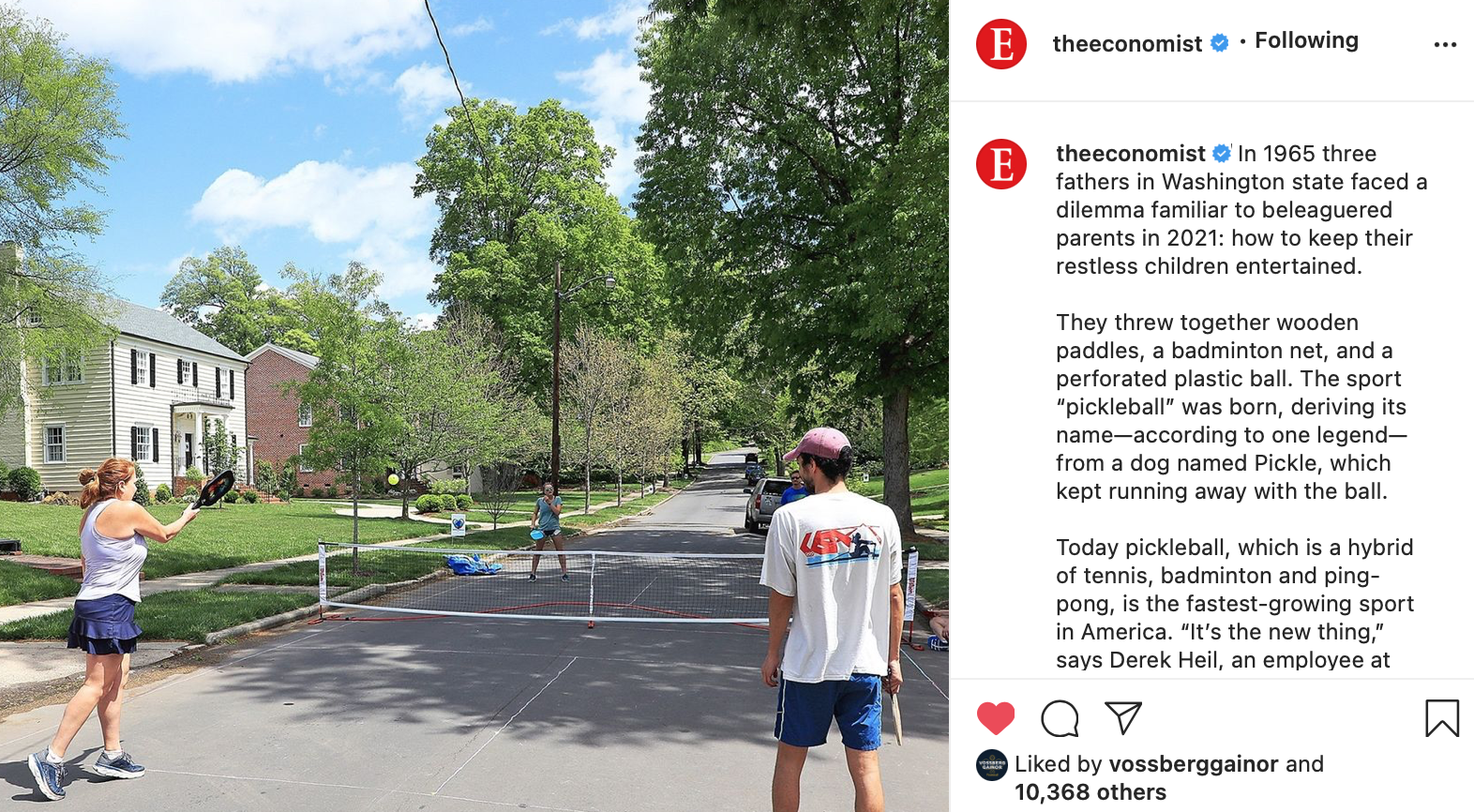