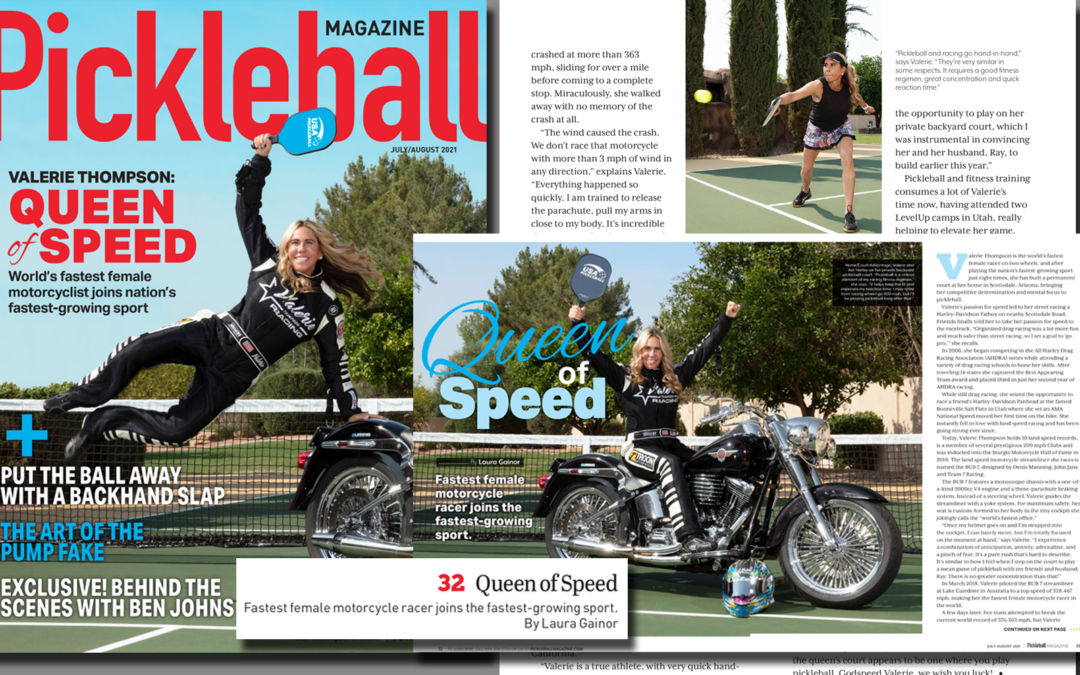 It was an honor to have the opportunity to work with the fastest female motorcycle racer, Valerie Thompson, on the latest cover story for Pickleball Magazine. Valerie is an inspiration to many women and I enjoyed listening to her excitement for her new-found passion for pickleball as she utilizes to sport to help prepare her to set out to reach 400mph at the Bonneville Salt Flats later in August.

Read the full story below and check out the complete July/August 2021 Pickleball Magazine issue HERE.

Valerie Thompson is the world’s fastest female racer on two wheels and after playing the nation’s fastest growing sport just eight times, she has built a permanent court at her home in Scottsdale, Arizona, bringing her competitive determination and mental focus to pickleball.

In 2006, she began competing in the All Harley Drag Racing Association (AHDRA) series while attending a variety of drag racing schools to hone her riding skills. After traveling 14 states she captured the Best Appearing Team award and placed 3rd in just her second year of AHDRA racing.

While still drag racing, she seized the opportunity to race a friend’s Harley-Davidson Panhead at the famed Bonneville Salts Flats in Utah where she set an AMA National Speed record her first time on the bike. She instantly fell in love with land speed racing and has been going strong ever since.

Today, Thompson holds 10 land speed records, is a member of several prestigious 200 mph Clubs and was inducted into the Sturgis Motorcycle Hall of Fame in 2018. The land speed motorcycle streamliner she races is named the BUB 7, designed by Denis Manning, John Jans and Team 7 Racing.

The BUB 7 features a monocoque chassis with a one-of-a-kind 3000cc V4 engine and a three parachute braking system. Instead of a steering wheel, Valerie guides the streamliner with a yoke system. For maximum safety, her seat is custom formed to her body and the tiny cockpit she jokingly calls the “world’s fastest office.”

“Once my helmet goes on and I’m strapped into the cockpit, I can barely move, but I’m totally focused on the moment at hand,” said Valerie. “I experience a combination of anticipation, anxiety, adrenaline, and a pinch of fear. It’s a pure rush that’s hard to describe. It’s similar to how I feel when I step on the court to play a mean game of pickleball with my friends and husband, Ray. There is no greater concentration than that!”

In March of 2018, Valerie piloted the BUB 7 streamliner at Lake Gairdner in Australia to a top speed of 328.467 mph, making her the fastest female motorcycle racer in the world.

A few days later her team attempted to break the current world record of 376.363 mph, but Valerie crashed at more than 363 mph, sliding for over a mile before coming to a complete stop. Miraculously, she walked away with no memory of the crash at all.

“The wind caused the crash. We don’t race that motorcycle with more than 3 mph of wind in any direction,” recalls Valerie. “Everything happened so quickly. I am trained to release the parachute, pull my arms in close to my body. It’s incredible there were only minor cuts and bruises from the crash. It’s real testament to the superior design of the BUB 7, I feel lucky I’m here to tell the story.”

Now three years later, insert pickleball and it couldn’t be a better match with racing to help her mental and physical training as she continues her quest to capture the fastest motorcycle title.

“Pickleball and racing go hand-in-hand,” said Valerie. “They’re very similar in some respects. It requires a good fitness regime, great concentration and quick reaction time. During a race everything seems to move in slow motion, but you have to be planning your next move and react quickly. For me, it’s the same with pickleball. I need to plan my shots, but be prepared to react quickly as the game evolves.”

It didn’t take long for Valerie to fully commit to the sport with professional lessons and her own court. Valerie was elated when she discovered her neighbor was the former USA Pickleball President, Jack Thomas. She’s taken many continued lessons with Jack and at the JW Marriott Desert Ridge Resort in Scottsdale until her home court was finished.

Since February when she began playing, Valerie has found many friends and fellow racers who also play. Just recently she had the biggest photoshoot of her career for Bentley Magazine with “photographer of the stars,” John Russo. (celebrity A-list photographer). An avid pickleball player himself, the motorsports photoshoot quickly turned into a long discussion about their mutual love of the sport. “Now I’m even more excited about the game, I hope John and I can play next time I’m in California.”

“Valerie is a true athlete, with very quick hand-eye coordination and she moves fast on the court, so pickleball is a natural for her,” said friend and fellow player, Andy Starr. “She’s a lot of fun to play pickleball with and continues to improve her game by having the opportunity to play on her private backyard court, in which I was instrumental in convincing her and her husband, Ray, to build earlier this year.”

Pickleball and fitness training consumes a lot of Valerie’s time now having attended two LevelUp Camps in Utah, really helping excel her game.  She has a vision to host her own tournament on the Bonneville Salt Flats, creating an unreal experience of racing and playing pickleball on the world’s fastest racecourse.

The Bonneville Motorcycle Speed Trials, held August 28 – Sept. 2, will be the first time since her 2018 crash that Valerie has raced the BUB 7. The first priority is to execute practice runs to ensure everything performs as needed after a three-year rebuilding effort. If “break-in” runs go well and weather and track conditions allow, the team will attempt breaking the world speed record for the world’s fastest motorcycle title.

“There are a lot of eyes on me and I have to be my best when racing on the Salt. I must be 100 percent focused and ready to react to the weather, the track and most importantly, the machine. Pickleball plays a key role in helping me train to make motorsports history.”

“Friends tell me I always go 2,000% when I set a new goal,” laughed Valerie. “Pickleball is a critical element of my racing fitness regime. It helps keep me stay fit and improves my reaction time. I may retire from racing when I go 400 mph, but I’ll be playing pickleball long after that. ”

Valerie will have a central role in the upcoming documentary film, “Rockets and Titans,” sharing her and Manning’s quest for the world’s fastest motorcycle title. Visit ValerieThompsonRacing.com for details on upcoming races, the bikes she races and the official movie trailer.

The worldwide motorsports press nicknamed Valerie “America’s Queen of Speed.” From all appearances, the queen’s court appears to be one where you play pickleball. Godspeed Valerie, we wish you luck! 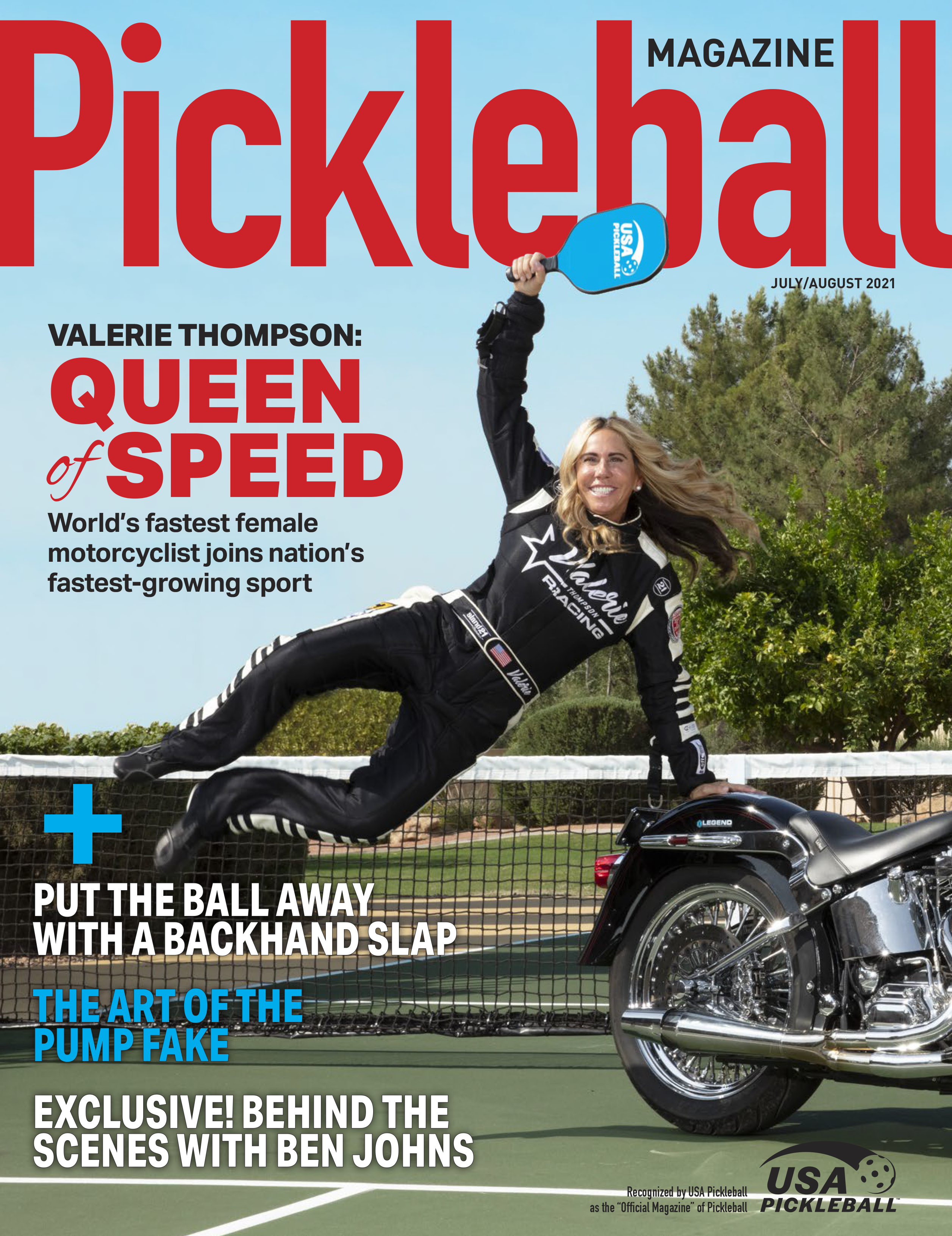 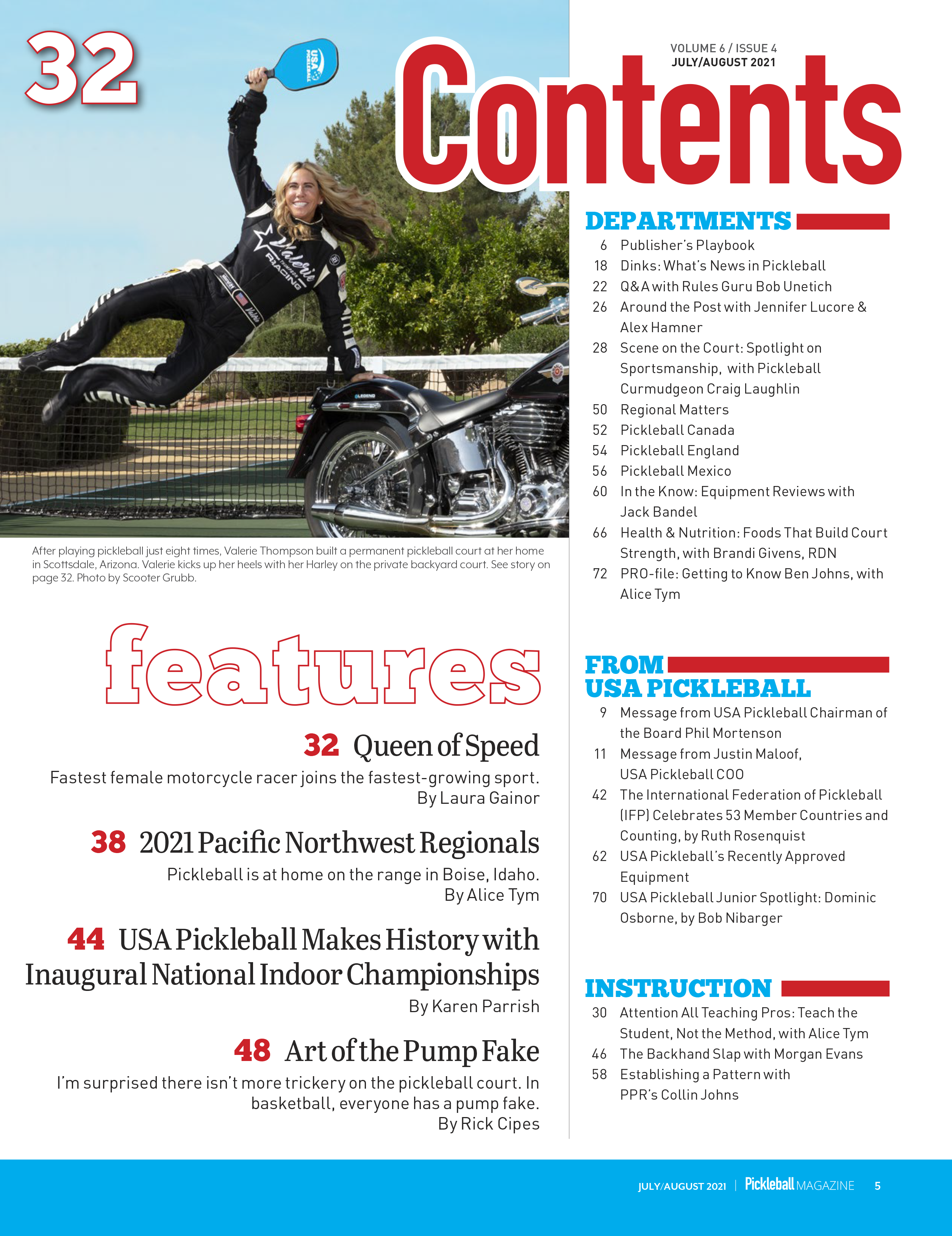 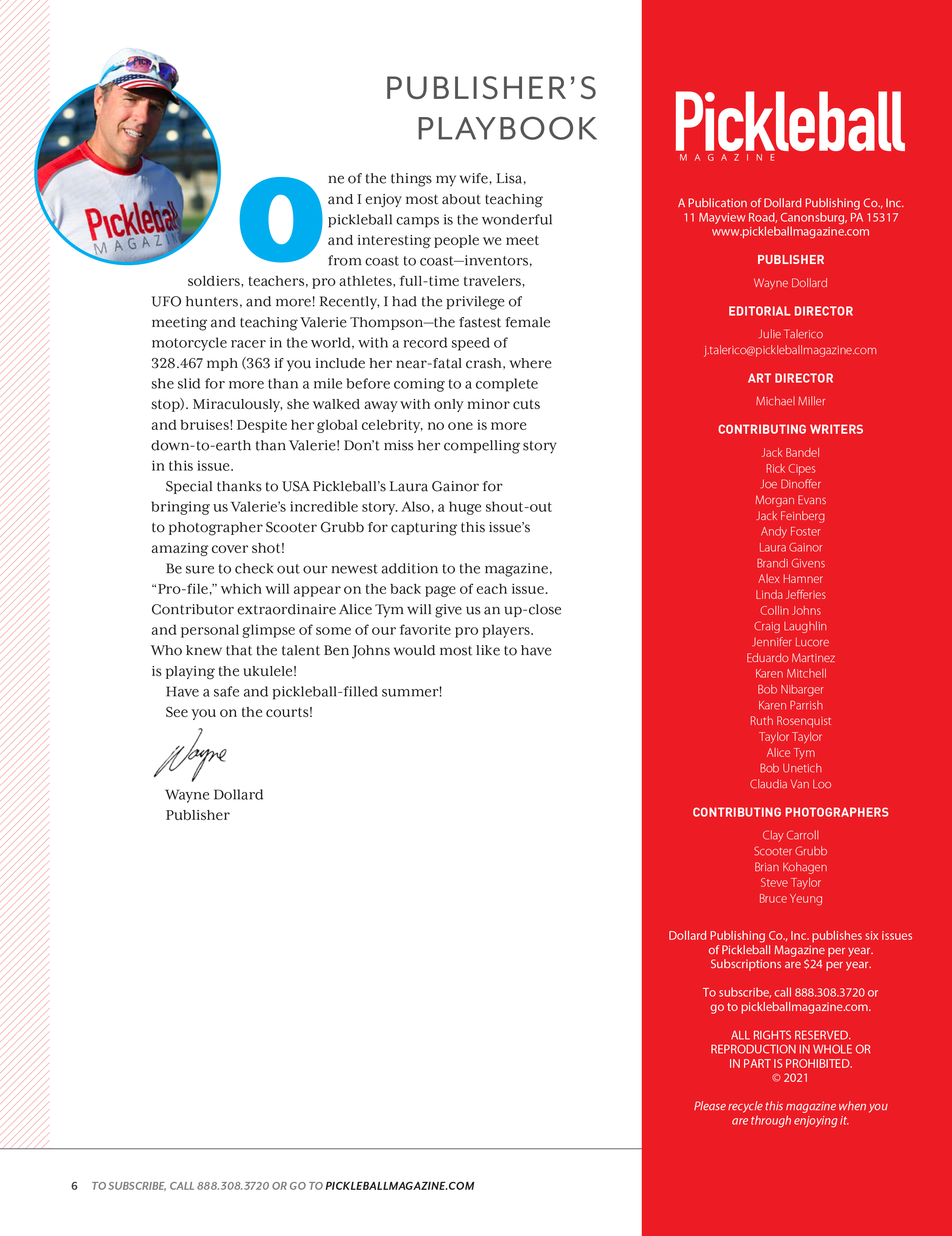 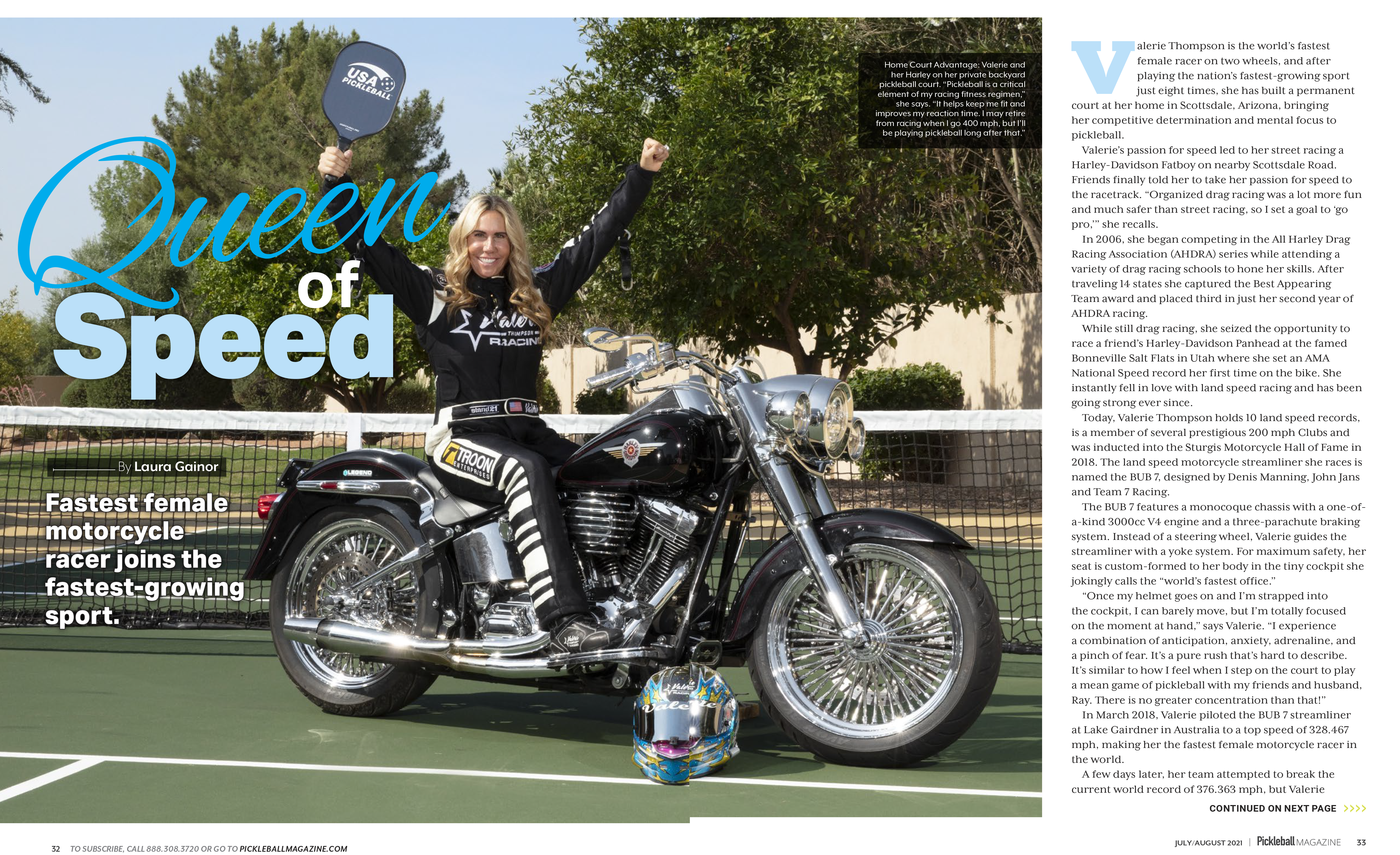